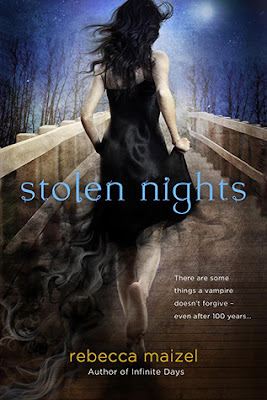 Lenah Beaudonte should be dead. But having sacrificed herself to save another, she finds herself awakening with strange powers that are neither vampire nor human—and a new enemy on her trail. In her vampire life, Lenah had thought that being human was all she ever wanted; but the human heart suffers pain, heartbreak and loss.

With her new powers growing and the dark force of the Nex after her soul, Lenah faces a choice: between the mortal love of gorgeous Justin, whose passion fed her human soul, and taking a different path to become the mistress of her own destiny, wherever that may lead...

When I started reading the book I thought it would be better than the first one. I was wrong. Although I did get some enjoyment from it, the book soon took a path that it shouldn’t have, making pit stops of unnecessary drama.

Lenah, for being a person who has been alive longer than anyone should be, really has no idea of what she wants. She is selfish, shallow, and whiny. I get that her body is still in those teenage years, but her mind is older, shouldn’t she be above and over that already? Why is she making so many idiotic mistakes which keep endangering the people she “cares” about?

There are still love lines galore. It was annoying having to witness her wishy-washy “love” feelings. But as stereotypical and clichéd as the whole situation was I still preferred Rhodes over Justin. Yes, I hold grudges and I’ve been carrying one since the first book when Justin said some things he shouldn’t have…

In the whole book, the only character who made it a little better was Vicken. He was funny and livened things up a bit.

I’m not sure if there’s a third book. If there is, I think this is it for me. Not even what happened at the end can make me come back to this series.

Rebecca Maizel is the bestselling author of the Vampire Queen series, starting with Infinite Days. She graduated from Boston University and the Rhode Island College master’s program. She received her MFA from Vermont College and teaches community college in Rhode Island.

*I received a digital copy from the publisher through Netgalley in exchange for an honest review.
*I am not affiliated to Amazon, B&N, or any other online/physical store I mention on my blog.