(Review) Dress Your Marines in White by Emmy Laybourne 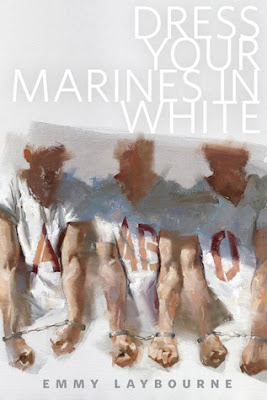 It was just a test report. Like one of many, many he’d written up in the past. Except this time, several of the test subjects are dead…”

At first, Dr. James Cutlass had thought his new job at NORAD was thrilling and full of opportunities, but that was before the demonstration… “Dress Your Marines in White” is the story of the terrifying choices surrounding a chemical weapons demonstration gone horribly wrong.

The story is told through a serious of flashback Dr. James Cutlass has as he is working on a report for an incident, if you can call it that, which happened during a testing demonstration of a chemical weapon. The use of these flashbacks, which kept getting cut off when present time events broke James' trip down memory lane, certainly helped give it a suspense filled air. I really wanted to smack his teenage son just so his father could get on with it and I could finally know what the heck happened.

Well, once I was done with it I blinked once, the twice and re-read the last part.

Now the hardest part. The conclusion.

This was a lot more realistic than I would have wanted it to be. It makes me wonder just how many "criminally insane scientists" are out there pretending to be working for the sake of their love for science and their countries. The story basically shows us how one person's choice, in this case one last sentence on a very important report, makes all the difference.