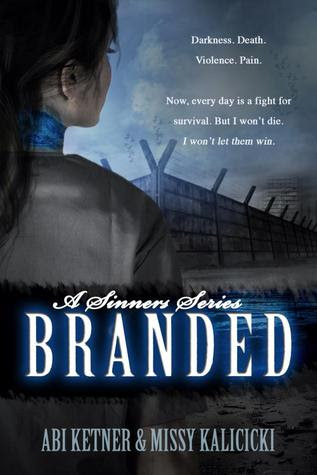 Fifty years ago the Commander came into power and murdered all who opposed him. In his warped mind, the seven deadly sins were the downfall of society. He created the Hole where sinners are branded according to their sins and might survive a few years. At best.
Now LUST wraps around my neck like blue fingers strangling me. I’ve been accused of a crime I didn’t commit and now the Hole is my new home.

Now every day is a fight for survival. But I won’t die. I won’t let them win.

The Hole can’t keep me. The Hole can’t break me.
I am more than my brand. I’m a fighter.
My name is Lexi Hamilton, and this is my story.

This was supposed to be a quick read since the book is barely over 250 pages. Yet I found myself trudging through it for a week. At the beginning although the writing was not something I liked in some parts, I could easily overlook it since the story being told was interesting and it captivated me. I liked… Actually, I loved the idea of using the seven deadly sins as the base for a dystopian book. This was what got me interested in it in the first place. I still think it was a good idea, but I felt the execution of it was lacking.

The first 100 pages, or so, of the book were very good. The action scenes and the description of them, minus the constant vomiting, felt right and I looked forward to them. But as the story progressed, it started to drag and things like contradicting ideas within the same page, slight over mention of body secretions, the inappropriate and unrealistic reactions the characters had to various situations, stilted and repetitive conversations, among others, put a damper on my enjoyment.

Another thing which disappointed me about the book was how the characters were portrayed. They seemed flat and even worse was Lexie’s ever growing “unlikability”. As she went through each new experience in this dark place she was dumped into instead of becoming more mature, she seemed to grow more childish and selfish. And when insta-love happened, she was even worse.

The book was also predictable. There were far too many obvious clues for me to not to figure out the revelations revealed (Wow, that was redundant.) at the end when I was barely halfway through the story.

I do have to give them thumbs up for the book cover. It’s dark, haunting, and pleasing to the eye. But more importantly, it’s actually relevant! The brand, the clothes, and even the imposing walls are all elements found within the story.


*I received an e-book copy through Netgalley in exchange for an honest review.
*I am not affiliated to Amazon, B&N, the Book Depository or any other online/physical store I mention on my blog.