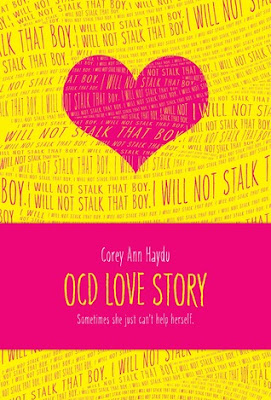 When Bea meets Beck, she knows instantly that he’s her kind of crazy. Sweet, strong, kinda-messed-up Beck understands her like no one else can. He makes her feel almost normal. He makes her feel like she could fall in love again.

But despite her feelings for Beck, Bea can’t stop thinking about someone else: a guy who is gorgeous and magnetic... and has no idea Bea even exists. But Bea knows a lot about him. She spends a lot of time watching him. She has a journal full of notes. Some might even say she’s obsessed.

Bea tells herself she’s got it all under control. But this isn’t a choice, it’s a compulsion. The truth is, she’s breaking down...and she might end up breaking her own heart.

OCD Love Story was really good in a really weird and scary way.

I liked the way the author wrote this book. The descriptions of these compulsions are so vivid that I couldn't help but feel like I was right there when it was all happening. And even though I do like the writing, and enjoyed the story, I have to admit that it affected me to the point of crying.

At the beginning I thought "Bea isn't that bad", but as the book progressed I saw just how deep her issues ran. It was a bit disturbing seeing this girl obsess over people she had never met and it was like watching a train wreck happening. You don't want to look, yet you can't look away. And I kept wishing, wanting, she would just admit to herself and someone, besides no good Lisha, just how much help she really needed. But she kept being in denial. But even after everything she did and even after all my "Bea, do not do that!" moments, this is one of those very few and far apart occasions when I just couldn't get mad at her. I just felt exhausted.

Lisha... Lisha... I don't know if Lisha was supposed to be the steady, both feet firmly planted on the earth best friend, but I do know that if she was, she completely failed that role. And I think she's not completely there either. She actually helped Bea in the early stages of the stalking. That left me a little cold. She would help her and then judge her when she's not getting enough attention. I'm betting Lisha has her own set of issues and complexes to deal with. Maybe not as severe as Bea's are, but there nonetheless. And no, I don't think she was being just a "teen". Anyways, I didn't like her. Not even at the end.

And Beck. Poor Beck. He was just a sad boy. I liked him, he really was a sweet boy, but I felt pity for him every time his OCD popped up. You could tell he wanted to be able to break away, touch and be touched by people and do all sort of things, but he was held back by his own mind. The story behind the number compulsion was just as sad. *sigh* I know the author mentioned Arnold Schwarzenegger when referencing Beck's body, but by the time he was mentioned as a reference I had already formulated my own body for Beck. Plus let's face it, thinking of Beck as A.S. was not, and still is not, appealing... at all. So when the muscles were mentioned Kim Jong Kook's, a South Korean singer and entertainer, body came to mind.

He was my model for Beck. Minus, you know, the being Asian part. Just the body. Bear with me... 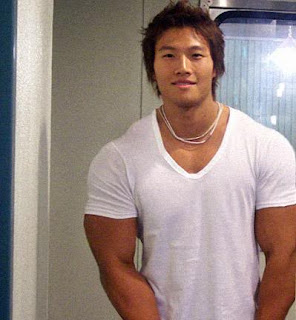 This is an older picture.
My main complaint with the book is the cover, although the words say one thing, the colors say another. Unless, that's just part of the irony that is found within the book, all the denial from Bea and how things look from her point of view.

I liked this book, I really did, but I wouldn't read it again. It was just plain exhausting to take this ride. Although it was kind of worth it at the end.

My rating for OCD Love Story is 4 out of 5 stars.

P.S. There's one song I discovered this week which kept replaying in my head while I was reading the book. The song is performed by A-Jax, a South Korean boy group, and it is called "미쳐가" which means "Insane" or "Crazy".


Here's a version with English subs.

*I read this book online on Pulse It.
*I am not affiliated to Amazon, B&N, or any other online/physical store and/or website I mention on my blog.