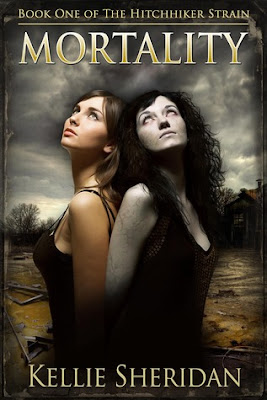 Zombies are probably the only creatures which sort of freak me out. Yet I can't help but feel drawn to them. But that's not what first thing which called my attention. It was the cover. I loved it and I think it's very representative of the stories in the book.

The story is told from two point of views, teenagers Savannah and Zarah. I have to say really I liked the way this was done. You could say one point of view was told from the perspective of a Zombie slayer/hunter and the other... Well, from someone who is the complete opposite. Both of these girls tell their stories starting from different points in the timeline. While one starts telling her story from when the infection first started appearing, the other starts six months afterwards. And even though one of the starts after everything has happened, we are still told, or rather she tells us, the events which led her to where she was. I also liked the way you could tell the difference of the "voice" when PoV's switched from one to the other. Both were talking about the same thing, the same events, but you could tell it was two different people telling the story.

I liked the way the story flowed. When Savannah was talking, it was fast. Sort of like her personality. I didn't like her, but liked the way the story was told. While when Zarah was talking there was this sense of calm under all the sense of urgency. I REALLY liked Zarah. Actually, I loved her, and her chapters. Especially after the motel scene happened and she talks of her feelings. I would have gone crazy if I was her. But the end... *raises eyebrow* It would have been so great if the story had taken another route instead of the one it took. I sort of knew it would be that way after everything clicked together, but I was really hoping I was wrong. I wasn't and I was disappointed. Also, the ending to that story felt rushed. Actually, they both felt that way. But there's a book two, so I can ignore it.

Besides Savannah, another character I didn't like was Cole. Really... what was he thinking? No, really. I actually yelled "Are you crazy?" (in Spanish) a few times. I really want to understand him, but I just can't. And at the end, I feel like he is hiding something from Savannah again. I really wanted to smack him since he first appeared. Liam was a bit better. I'd say he passed the test. Poor thing...

Besides Zarah and Liam's story, another good point the book has was there no real dreaded love triangle nor a love square of doom! I was so happy about that. Yeah, Savannah had a crush, but I could tell it was very superficial. There was a bit of insta-love, but it was the apocalypse. *shrugs* Also, I liked that the story had two different types of zombies. The usual mindless ones and the uber Zs (the intelligent ones), so that's another brownie point right there.

I enjoyed Mortality. Really, I did. Although the book is about terrifying zombies, it wasn't "scary". At all. But it does have the "ew" factor rampaging through its pages. Just reading about the way they looked, moved, ate, and smelled definitely had my skin crawling. Plus, it was a quick read. I read it in just a few hours. So yeah, I liked it. I will definitely check out the other books in the series.

My rating for this book is 4 stars out of 5.

*I received a free e-book copy from the author in exchange for an honest review.
*I am not affiliated to Amazon, B&N, the Book Depository or any other online/physical store I mention on my blog.