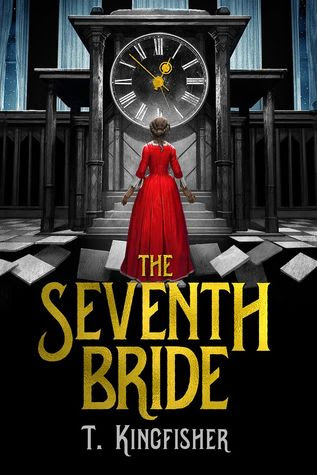 Title: The Seventh Bride
Author: T. Kingfisher
Pub. Date: November 24th, 2015
Publisher: 47North
Blurb:
Young Rhea is a miller’s daughter of low birth, so she is understandably surprised when a mysterious nobleman, Lord Crevan, shows up on her doorstep and proposes marriage. Since commoners don’t turn down lords—no matter how sinister they may seem—Rhea is forced to agree to the engagement.

Lord Crevan demands that Rhea visit his remote manor before their wedding. Upon arrival, she discovers that not only was her betrothed married six times before, but his previous wives are all imprisoned in his enchanted castle. Determined not to share their same fate, Rhea asserts her desire for freedom. In answer, Lord Crevan gives Rhea a series of magical tasks to complete, with the threat “Come back before dawn, or else I’ll marry you.”

With time running out and each task more dangerous and bizarre than the last, Rhea must use her resourcefulness, compassion, and bravery to rally the other wives and defeat the sorcerer before he binds her to him forever.

I changed my rating score for this book from two to three a few times before compromising and telling myself it's a 2.5.

The first thing I noticed about the book was the title. I have no idea why, but I tend to be attracted by "the so many wives" title even if I never read them. The cover is also very pretty and the premise sounded interesting.

But once I started reading it, I felt like closing it and just admitting defeat. For one, I did not like the narration style. It felt stale, there were too many "speaking to self" by Rhea passages (most of the book), the changing to third person once Rhea stopped rambling on made the rambles worse somehow. And the descriptions. I might have skipped a line or five when a whole paragraph was spent talking about the same darned thing. I like something to be described well so I can get an idea, but please do not spend three pages describing the same thing.

And then there was Rhea herself. Oh, dear young and foolish, yet somehow... but not so foolish Rhea? To be honest, I hated her "voice" from the moment I started the book. She is supposed to be 15 years old, but if I wasn't told she was 15 years old I might have believed she was younger than that. I just could not connect with her. Actually, I didn't connect with any of the characters. I really didn't care about what happened to them since they felt too superficial.

Once she begins her real adventure things do get a bit more interesting because of what was happening around her, but not enough for me to swept away by the story. And I really like to be swept away when reading a book. But then the ending came and I was left thinking "that's it...".

Though, not everything was bad. I liked that there was no insta-love, or love story of any kind, which made the author forget the book was supposed to have a plot. The book did have a plot. The girl although not of my liking didn't depend on "Prince charming disguised as an arrogant bastard who is just that way because he loves her so much" to come to her rescue. She did her darned saving. So *Thumbs up* for that.

*I received a digital copy of this as a 'Read Now' through NetGalley.
Posted by Ari Lee at 10:19 AM