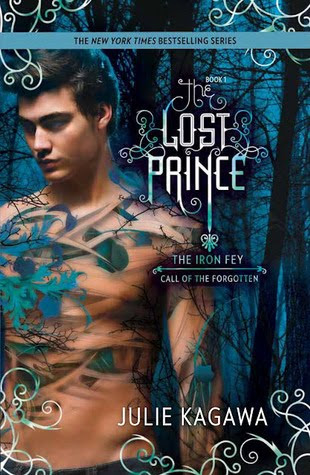 Don’t look at Them. Never let Them know you can see Them.

That is Ethan Chase’s unbreakable rule. Until the fey he avoids at all costs—including his reputation—begin to disappear, and Ethan is attacked. Now he must change the rules to protect his family. To save a girl he never thought he’d dare to fall for.

Ethan thought he had protected himself from his older sister’s world—the land of Faery. His previous time in the Iron Realm left him with nothing but fear and disgust for the world Meghan Chase has made her home, a land of myth and talking cats, of magic and seductive enemies. But when destiny comes for Ethan, there is no escape from a danger long, long forgotten.

I was somewhat excited for "The Lost Prince" since I did like "The Iron King" and I wanted to read about a teen Ethan. But my initial excitement kept diminishing as I kept reading the story. I did like the plot and the idea behind the book, but on more than one occasion, I wished things had happened very differently.

Ethan was not the cute little boy we first met in "The Iron King", years of trying to remain invisible to the fair folk had made him jaded, hostile, and very lonely. At first, I was, and still am sort of, okay with his character, but I have to say he has that whiny self blame act down. And although, I don't really mind that much when a character starts diving into the self blame act, it does get old if it gets too repetitive. This happened a lot in "The Lost Prince". I really wanted to magically enter the pages and become that random character who shakes him and makes him see the bigger picture. "You are surrounded by the heroine wannabees, sweetie. It is not your fault."

About the girls well, I couldn't stand any of the two. Kenzie was too pushy and Annwyl was too bland. They had different kind of presences, but they were both the same in one thing; they belong to the damsels in distress category. I intensely dislike that category, especially when they tried to come off as "strong", but for me were more like burdens. I really wanted to yell at them: "Just stay home and out of the way!" Don't get me wrong, I'm all about "Girl Power", but how can I possibly sympathize with these two when they have lost all sense of self preservation? Whatever the reasons.

Keirran gave me some really big "What the heck?" moments at the end. I really wanted to smack him on the back of the head. Then, I saw the title of the second book. Could it be him it refers to? I could be wrong, but I really think so.

Like I mentioned before, I wish some parts of the book were different, like the love story. It would have been great if it had been Samantha who had reappeared in his life. It would have given bigger credibility to the romance than the insta-love found in the book. At least, there was no dreaded love triangle, which I feared would happen at one point, and this earned the book bonus points.

I did love the action scenes. It was great reading about how Ethan would whack and kick the creepy unknown things with the skills he learned doing Kali. I also loved Razzor, even if he was a stereotypical pet type of character, his random comments and "Bad Kitty!" phrases made me laugh every time. And I was too happy when Grim and Puck made appearances. There really should be more of Puck.

Also, I have only read the first book in The Iron Fey series, and I didn't feel lost at all when reading this book.

*I received an eARC from the publisher through Netgalley.