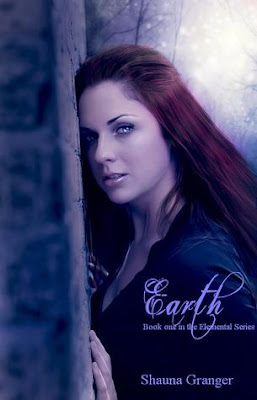 Shayna and her two best friends have the abilities to manipulate and control the four elements, earth, air, water and fire. While learning to hone their growing powers, they discover a new and malicious presence in their sleepy beach town. Someone is performing blood magic and threatens to expose their small magical community. So far only small animals have been slaughtered, but then the nightmares start.

Shayna suffers nightmares of being chased and sacrificed only to wake up bloodied and bruised. She thinks her magical blood is the ultimate target for the final blood rite. When an innocent girl, Tracy, is kidnapped Shayna knows it's only a ploy to draw her out; she can't let someone die because of her.

In Earth, we see how three friends use their magic, which they have known they possess since before the book starts, to help keep the balance between good and evil. And this made for an entertaining read splashed with just the right amount of darkness.

Storytelling-wise, I liked the amount of details with which the author describes the scenes, especially those where they do their magic rituals. It's so precise you can practically see it happening in front of you. This also leads me to think the author did a lot of research to be able to describe these parts so well. I also liked the pace in which the story is told. It wasn’t accelerated, but it wasn’t at a snail pace either. And that’s always good because it helps soak in the details and follow the events better.

Another aspect of the book which made it refreshing was, yes, there's no love triangle! Actually, what’s even better is that there’s no romance per se, something I had dreaded would happen from the moment Jensen and Shayna met. I really liked that the book kept right on track with the plot.

Although, I have to mention the fact that Shayna was so attached to him, when she hadn’t even had more than two, or three, conversations with him, made it a little hard for me to accept. I mean, how could she blindly trust him so easily? Even to the point of disregarding her friends’ warnings. It’s not that I didn't like him, it’s just that I wasn't really given the chance to fall in love with him since he’s barely in the book.

That leads me to what I didn't like about the book, Shayna. I tried. I really did. But she’s such an angry and patronizing person. I had a hard time trying to sympathize with her and it’s kind of hard to thoroughly enjoy the book when you don’t like the main character. But it wasn’t all bad, she had a few good moments.

But I have to say that overall, I liked the story the book was telling. 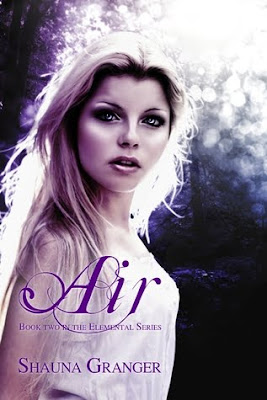 It was a rough start to the school year for Shayna and her friends, Jodi and Steven, but thankfully summer break is near. Trying to sort out her feelings for the new guy in town, Shayna agrees to let Jensen join her on a group date with her friends. While out they end up at a local coffee house where their classmate, social outcast Jeremy McCormick, is humiliated by his baseball star brother. When Jeremy runs away from the jeering crowd, Shayna and Jodi hear the unmistakable sound of a thousand wings chasing after him, but no one else seems to hear them. These are not like any air elementals that Shayna or Jodi have ever encountered before and they fear Jeremy has gotten himself tangled up in something too dangerous for him to handle. But when Shayna tries to help Jeremy control his magical abilities she realizes it might be the biggest mistake of her life.

I was a bit disappointed with Air.

I saw Air and, since it's Jodie's element, I was hoping the book would focus more on Jodi and let her be in the spotlight, without Shayna. Maybe even let her be the narrator as she explores these changes happening to her. That doesn't happen. I mean, Shayna does sort of tells us: "Oh, Jodi's magic is stronger now." But it's just not the same even with those cool extra abilities Shayna has.

Shayna hasn't changed, at all. I disliked how in this book her patronizing and angry self grew right along with her powers. And she has a new victim, Jensen, who is now in a very casual relationship with her. I also dislike how she has no qualms about unleashing her powers on her friends, for her benefit, yet is skeptic to do it to the "bad" guy in self defense.

I also don't understand why Jodi and Steven- love him!- are shown to look like beginner novices almost throughout the whole book when they are certainly nothing of the sort. I mean, neither seems like a slacker when it comes to their powers, so they would be doing their homework and honing their powers. Especially Jodi, if she really feels that big a rivalry towards Shayna.

BUT! Shayna does have her moments when shows she cares about her friends, like when Steven had that little "accident" in the backyard or when she's covering Jodi's eyes so Jodi doesn't see something horrible happening. She just needs to work with her anger problems just as much as she works with her magic.

One of my favorite things about this book, is the plot. I like how Granger introduces new characters and lets us wonder what their roles in the story will be. I also loved that the plot had faeries intertwined to it. And once again, the story is told at the perfect pace, not too slow nor too fast. This helped feed the air of mystery surrounding the events happening with Jeremy and whatever he's doing.

Another great thing is, even with Jensen and Shayna in a casual relationship, the plot is not forgotten in favor of page after page of teenage romance and there's no dreaded love triangle making unwanted appearances. This always lets me enjoy the book much more. I do wish Jensen had a bigger presence in the story. I have a feeling he could be a character I could really love since I did like him more in this book.

I enjoyed this book despite my complaints. It read fast, it was entertaining, it had some mystery and Fairies! And well to be honest, the story is kind of addicting.

I will be reading the third book soon. I'm really interested in finding out if a new character will be introduced to be the Water Child, or if it's someone we already know.

Also check out the third book in the Elementals Series, Water: 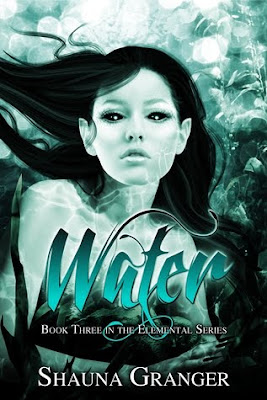 Book Three in The Elemental Series.

Shayna's first surfing session of the summer is interrupted by the screams of a mother who has lost her little boy in the water. Without regard to her own safety, Shayna swims out, rescues the boy, but must escape the clutches of something far worse than she could have ever imagined – mermaids.

Compelled to answer the sirens' call, the boys of Shayna's town are drawn to the sea, but when they return are afflicted by an unknown illness, a sickness which is draining them of their life force. Unable to tell anyone about the mermaids, Shayna and her friends are forced to solve the mystery before it's too late, and in doing so, Shayna will finally have to face the full force of her powers. Whether she’s ready or not, she will have to face her true nature.


And keep your eyes peeled for Fire, book #4 in the Elemental series which is coming soon! 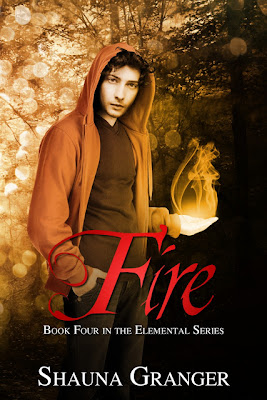 About the book:
Demons, faeries, and mermaids. Claws, teeth, and nightmares.

They have been beaten and bruised, set on fire, and nearly drowned, but manage to always find their way home. Over their last Winter Holiday break before college, Shayna, Jodi, and Steven try again to put aside the magic in their lives for a little mundane fun. But Shayna's mother is having dreams of fire and death. A mysterious stranger by the name of Liam has just arrived in town. And Shayna's attempts to manage her new angelic powers are set back by Steven's insistence that the trio intervene in a riot outside of a concert, with disastrous consequences.

In her attempt to stop the riot, a man sees Shayna use her magical abilities – a man driven mad by watching his brother die at the hands of a black witch. He stalks Shayna, plotting to destroy her and her friends. With her mother’s warnings echoing in her mind, Shayna is now in the fight of her life against an unlikely foe: a human man. 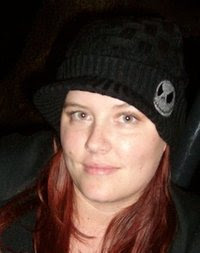 I don't do well talking about myself. So as basics go, I have recently self-published the first two books in my Elemental Series, Earth and Air, Young Adult Urban Fantasy novels. Look for the third installment, Water, coming in 2012!

I have been working on the Elemental Series for the last four years and plan for it to be a 5 book series. It was a hard decision to self-publish but it's been an exciting and terrifying ride.

And to my readers (or fans of my covers), I have beautiful bookmarks that I would love to share with you. If you'd like one, drop me a note with your contact info and I'd be happy to send you one!


Grand Prize:
There is a signed copy of each paperback, Earth, Air and Water and a matching bookmark for each. There is a mini Jack-o-lantern (that I carved) and an awesome, sparkly candle (electric) and some fun Halloween treats that include candy, stickers and copy of one of my favorite Halloween movies, Monster House. (US only) 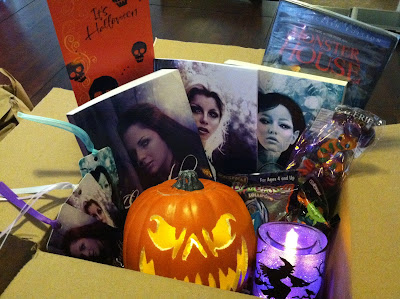 Three (3) other winners will also receive an e-book from the series, winner’s choice from Earth, Air or Water. (Open Internationally)
Posted by Ari Lee at 12:05 AM