Teaser Tuesday #11: The Alchemist of Souls by Anne Lyle 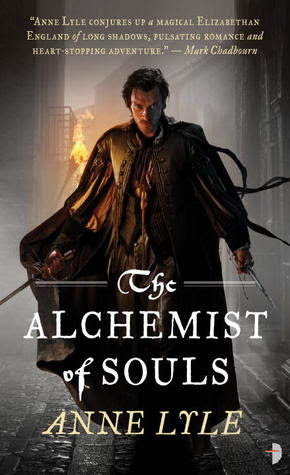 The door of the tavern opened, and the taproom fell silent. Four men came in, wearing dark blue livery, scarlet cloaks and steel breastplates and helmets, and bearing pole arms with long blades that glinted in the candlelight.
Synopsis:
When Tudor explorers returned from the New World, they brought back a name out of half-forgotten Viking legend: skraylings. Red-sailed ships followed in the explorers’ wake, bringing Native American goods--and a skrayling ambassador--to London. But what do these seemingly magical beings really want in Elizabeth I’s capital?

Mal Catlyn, a down-at-heel swordsman, is seconded to the ambassador's bodyguard, but assassination attempts are the least of his problems. What he learns about the skraylings and their unholy powers could cost England her new ally--and Mal his soul.

If you go HERE, you can read an extract of the book!

Also check out The Merchant of Dreams, the sequel to The Alchemist of Souls, which will be released in December 2012.

What are you teasing us with this week?