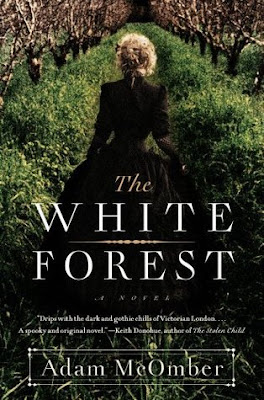 Young Jane Silverlake lives with her father at a crumbling family estate on the edge of Hampstead Heath. Jane has a secret—an unexplainable gift that allows her to see the souls of manmade objects—and this talent isolates her from the outside world. Her greatest joy is wandering the wild heath with her neighbors, Madeline and Nathan. But as the friends come of age, their idyll is shattered by the feelings both girls develop for Nathan, and by Nathan’s interest in a cult led by Ariston Day, a charismatic mystic popular with London's elite. Day encourages his followers to explore dream manipulation, with the goal of discovering a new virtual reality, a place he calls the Empyrean.

A year later, Nathan has vanished, and the famed Inspector Vidocq arrives in London to untangle the events that led up to Nathan’s disappearance. As a sinister truth emerges, Jane realizes she must discover the origins of her talent and use it to find Nathan herself, before it’s too late.

Adam McOmber, whose short story collection This New and Poisonous Air earned glowing praise for its evocative prose, here reveals a gift for fantastical twists and dark turns that literary fans will relish.

"The White Forest” it’s a dark and mysterious tale, but I had a love-hate relationship with this book. On one hand, I loved McOmber's enthralling writing style, but on the other I really disliked what seemed to be his main storytelling device in this story, flashbacks.

This might seem like a weird comparison, but if you are a fan, and are slightly addicted, to Asian dramas, like I am, you might notice a big similarity between this book and those; the flashbacks. I don't like flashbacks. Actually, it would be more appropriate to say I don't like the misuse and/or abuse of flashbacks and this book did just that. There were so many of those, and although I could follow what was happening, it was sort of frustrating to finally get into the story only to be pulled back out of it because another one reared it’s head. I honestly didn’t think anything would ever beat Korean dramas in the flashback department, but this did.

The story was also slow paced and it felt even slower because of all the flashbacks. But when Jane lived in her here and now the story and mystery behind Nathan’s disappearance was actually thrilling and engaging and I was able to enjoy it. The flashbacks do finally tone down and any references to the past that are made it’s done through stories they get out of people in their search for the truth of , both, Nathan’s vanishing and Jane’s existence.

I liked Jane, she was a dark character who was drawn to whom she thought was a bright one. But in the end, I thought she was actually the brightest of them all, even if she didn’t realize it.

I had a hard time rating this, and to be honest, I was ready to rate it 2 stars. But the ending of the book is really good and I got caught up in the flow of the story. The ending is sort of bittersweet. It left me with feelings of longing and nostalgia, even when I thought the ending was perfect for the story and it wouldn’t have had it any other way.

*I received a digital ARC copy from the publisher through Edelweiss. Thanks for the opportunity.
* I received no compensation for this review.
Posted by Ari Lee at 12:31 PM