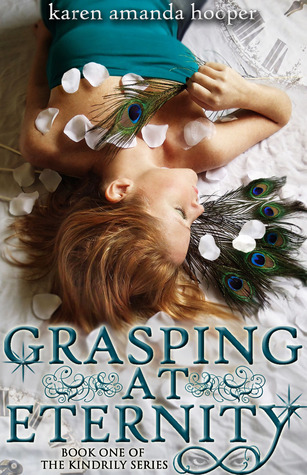 Grasping at Eternity is the first book in the Kindrily series. I'll admit what first drew me to the book was the cover and it was great discovering, as I read the story, everything on it has an actual meaning and it wasn't just there to make it look pretty. Although, it also serves that purpose. Also, the story deals with two themes I've always found interesting, reincarnation and soul mates, which piqued my curiosity further. So, it was not surprising when the book grabbed me from the first chapter and kept its hold until the very end.

Out of all the characters, the one I probably felt the most for was Nathaniel. I thought he was sweet and tragic. It was heartbreaking seeing him gain and loose hope over and over again through out the story. It was, also, very hard not to want to comfort him, especially when the points of view alternated between him and Maryah. I got to know what he was going through first hand and not just because of an observation coming from another character. I'm also curious about that big secret he's hiding from everyone, although I've began forming an idea of what it might be.

I didn't give the book 5 stars because, although it was very engaging, it had the same slow and steady pace almost all the way through it and I would have liked more hints at why Maryah took the decision to erase her memories.

I'm certainly anticipating the second book in the series and getting to know more about the characters and the secrets they keep.

Note: I received a free copy in exchange for an honest review. Thanks for the opportunity.