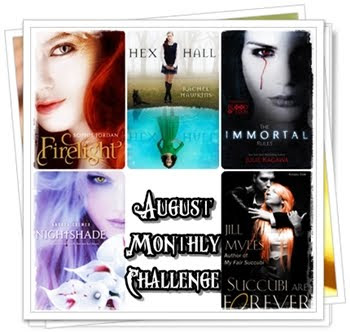 I decided to do this Monthly Challenge which I found on Lost in Wonderland. You don't have to do them all, you can just do a few of them.

1. Read a book with flowers on the cover:

Title: Nightshade
Author: Andrea Cremer
Synopsis from Good Reads: Calla Tor has always known her destiny: After graduating from the Mountain School, she’ll be the mate of sexy alpha wolf Ren Laroche and fight with him, side by side, ruling their pack and guarding sacred sites for the Keepers. But when she violates her masters’ laws by saving a beautiful human boy out for a hike, Calla begins to question her fate, her existence, and the very essence of the world she has known. By following her heart, she might lose everything - including her own life. Is forbidden love worth the ultimate sacrifice?


2. Read a book about shifters (not werewolves):

Title: Firelight
Author: Sophie Jordan
Synopsis from GR:Marked as special at an early age, Jacinda knows her every move is watched. But she longs for freedom to make her own choices. When she breaks the most sacred tenet among her kind, she nearly pays with her life. Until a beautiful stranger saves her. A stranger who was sent to hunt those like her. For Jacinda is a draki, a descendant of dragons whose greatest defense is her secret ability to shift into human form...


3. Read a book with a black background:

Title: Succubi Are Forever (18+)
Author: Jill Myles
Synopsis from GR: Tasked by the Archangel Gabriel, Jackie Brighton must find two more lost archangel halos before she's free of her deal. But she's not the only one hunting for the immense power the halos bring, and everyone around her has motives - succubi, serim, and vampire. It's a race to the finish line, and only one person is going to come out on top...


4. Read a book that takes place in the future:

Title: The Immortal Rules
Author: Julie Kagawa
Synopsis from GR: "In a future world, vampires reign. Humans are blood cattle. And one girl will search for the key to save humanity."

5. Read a book that takes place at a boarding school:

Title: Hex Hall
Author: Rachel Hawkins
Synopsis from GR: Three years ago, Sophie Mercer discovered that she was a witch. It's gotten her into a few scrapes. Her non-gifted mother has been as supportive as possible, consulting Sophie's estranged father--an elusive European warlock--only when necessary. But when Sophie attracts too much human attention for a prom-night spell gone horribly wrong, it's her dad who decides her punishment: exile to Hex Hall, an isolated reform school for wayward Prodigium, a.k.a. witches, faeries, and shapeshifters...
Posted by Ari Lee at 12:24 AM