This meme where the designer, photographer and/or illustrator of a favorite cover is featured is hosted by A Night's Dream of Books. I loved the idea since I always want to read a book when the cover is gorgeous. Bad habit, I know! 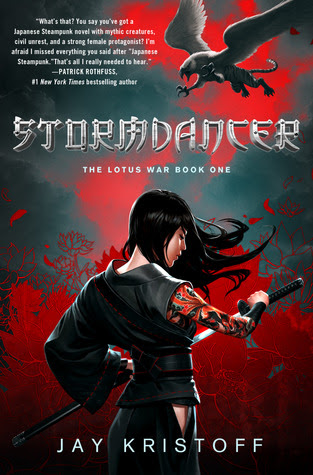 Title: Stormdancer
Author: Jay Kristoff
Illustrator: Jason Chan <-- Click to check out his other illustrations. (At least, I think that's him. It looks like his style.) Here is an interesting interview I found at Tor(dot)com about the making of the cover.

What I like about the cover:
I love the colors. If you haven't noticed, *looks around the blog*, I love the combination of black, red and white. I am also somewhat familiar with the Japanese culture, somewhat...on a very, very basic level, I love anime and Matsuda Shota. No? Ok... So, this book certainly gives off that Asian vibe with the Japanese girl in the middle of the cover.

I think it's a nice touch that she's surrounded by red lotus flowers below and the red, hazy, pollution filled sky above which also has a stalking arashitora in it. I'm currently reading the book, so I used the word found in it which names the mythical creature. I also like both the arashitora and the girl's poses. The creature looks like it's preparing itself to attack and she looks like she's preparing to defend herself.

And what I love the most about this cover is that every element in it, even the way the characters are posed, has something to do with the story. It's also such a beautiful illustration which is also a nice change from the same old flesh and blood girls in pretty dresses, not that I mind, I love those too.