This week I chose "The Immortal Rules" by Julie Kagawa.


I started to read the book because of a sampler from Harlequin and I've liked what I read so far. My only real complaint is that she does not look Asian. 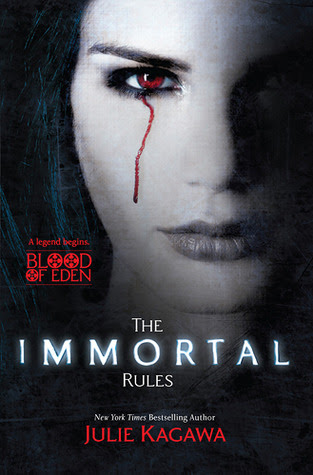 "In a future world, vampires reign. Humans are blood cattle. And one girl will search for the key to save humanity."Allison Sekemoto survives in the Fringe, the outermost circle of a vampire city. By day, she and her crew scavenge for food. By night, any one of them could be eaten.

Some days, all that drives Allie is her hatred of "them." The vampires who keep humans as blood cattle. Until the night Allie herself is attacked--and given the ultimate choice. Die...or become one of the monsters.

Faced with her own mortality, Allie becomes what she despises most. To survive, she must learn the rules of being immortal, including the most important: go long enough without human blood, and you will go mad.

Then Allie is forced to flee into the unknown, outside her city walls. There she joins a ragged band of humans who are seeking a legend--a possible cure to the disease that killed off most of humankind and created the rabids, the mindless creatures who threaten humans and vampires alike.

But it isn't easy to pass for human. Especially not around Zeke, who might see past the monster inside her. And Allie soon must decide what--and who--is worth dying for.

For more info about the series: Blood of Eden