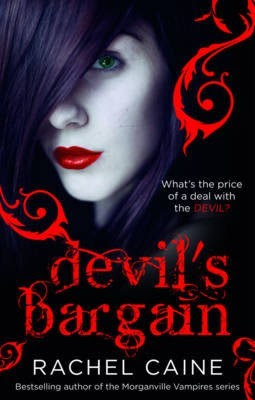 What's the price of a deal with the devil?

Playing by the psychic underworld's rules has cost..

Jazz Callender's whole life just got turned upside down. Her friend Ben's been convicted of a crime he didn't commit, and Jazz is determined to clear his name, even if it means enlisting the help of dark forces.

Enter James, a stranger with a mysterious offer. If Jazz pledges to work for The Cross Society, a shadowy secret organisation, he'll help her save Ben.

But as she's thrust into a world of psychic powers and dangerous magic, Jazz isn't just bargain for her friend's freedom. She's bargaining for her soul too.

And how high a price is she willing to pay?

When I finished reading Devil’s Bargain, I didn't know what to make of it. I liked it, but throughout the whole book I couldn't shake the feeling that something was missing.

After thinking about it, I reached the conclusion that it was probably the lack of a strong fantasy/paranormal element, which was more present in the later chapters of the book. Before that, the story mostly centered around the mystery of the offer and the red envelopes. I remember thinking, “Ok, where are the superpowers, the visions, and the elements that don’t make this book just a crime and mystery story?” But when I finally got to read about the psychics, it wasn’t as thrilling as I thought it would be, but I still liked the book.

I liked how the author applies terms we frequently use and gives them a meaning outside of what they are commonly used for. The author also pays a lot of attention to descriptions and that was sometimes great and other times I felt it made the book drag a little. But just as it was starting to get a bit slow, an action scene would come and save the moment. I like action and badass heroines, so it kept me interested.

All the characters had their reason to be. Although, I’m not too sure about James. He was sort of bland and the damsel in distress. *sigh*

I liked Jazz. She was sure of herself, yet when facing Lucia she was a little bit self conscious in the looks department. But she didn’t let that slight "insecurity" consume her every second and did what she had to do without being petty or throwing tantrums of childish jealousy. Having said that, I did feel the need to shake her a few times. I also wanted to tell her “Think things through before you act!”. She was very impulsive.

Lucia, I also liked her. She was also badass in a different way than Jazz. She was a bit more controlled and thought about things better. Also, I’m wondering whether Lucia was from Hispanic or Portuguese descent because of the way some words were spelled, like “Holá”. I think in Portuguese it’s “Olá”, but in Spanish it’s “Hola”. I don’t remember it being mentioned in the book, or maybe I missed it. So, I’m a little confused about that.

All in all, the book was an entertaining read and there was some humor which made me laugh out loud. I will be reading the second and last book in the series since this one ended in a cliffhanger.

*I received an ebook copy from the publisher through Netgalley in exchange for an honest opinion.
*I am not affiliated to Amazon, B&N, or the Book Depository.